Before beginning this activity I thought to myself that my consumption habits are exemplary. I ‘thought’ that I didn’t buy things that I don’t need, I recycle and compost, I drive a fuel efficient (ish) vehicle and attempt to eat local and organic food items… quickly I began to realize that, when closely examining my habits, this proved to be untrue. Below is a journal kept over the last 2 weeks observing the role that consumerism and marketing play in my daily life.

“Sundays are no longer a day of rest and religious observance because we can now engage in consumerism ‘at all hours and in all places” Mulligan, p. 29.

Today we did our weekly Costco run. We buy our vegetables, bread, snacks and sometimes even clothes at Costco because, well, it’s much cheaper than at other stores. As much as I know most of the food that you find at Costco probably traveled hundreds, maybe even thousands of miles to get there, that there are probably plenty of preservatives in it, and most products in general come from rather unsustainable means… the shocking thing here is that I, along with many others just don’t exactly know where everything comes from and by what means. That being said, I still find myself here on a typical weekend. It is here that you see consumerism at its finest. Do people really need to buy the 40 pack of light bulbs, 100 pack of batteries, or 30 pack of croissants?? Not at all! But yet Costco flourishes and makes millions because people feel that the deals are just too good to pass up.

Today, I made a conscious effort to not buy more than just food that we needed for the week, but I would be lying if I told you that that was the case every time. I am definitely guilty in the past of buying clothes, shoes, books, or even furniture sometimes that I did not NEED but rather wanted because I simply wanted more ‘stuff’ and because it just seemed to be too good of a bargain to pass up on. This was a good way to start this reflection piece because I feel like it is beginning at the epitome of my ‘consumeristic’ experiences/practices.

I began my day by looking at my phone and going on some apps to do some reading and some browsing. Before I knew it, I found myself on ‘GROUPON’ looking at items that I absolutely do not need. It wasn’t until about one full minute of scrolling down on the Groupon app that I had asked myself “what am I doing? What am I even looking for?” I realized that strictly out of boredom and curiosity I was looking to see if there were any deals that may interest me. Not things that I need just potential interests. I quickly shut down the app and deleted it as I realized that all it was doing was creating an opportunist way of thinking and it served no real need, but rather a desire to find a good bargain.

My weekdays typically consist of going to the school gym, teaching throughout the day, walking the dog, cooking dinner and preparing lunch for the next day, and then some reading, homework and if time watch some television that I get from a streaming source, so no commercials. At first glance, I did not see any regular connections to consumerism.

That being said, I still did think of one way in particular that marketing made it’s way into my day; through my peers and students. I found that there were several conversations that took place throughout the day relating to purchasing new items. Those items included a new watch, truck, lunch in the cafeteria and clothing items. Before having these conversations, I had no desire to purchase anything as it seemed that there was little to no need for them. However, when items came up during conversation, for example “Hey Ryan, you have to see this new FitBit I got, you’ll love it!” my interest was piqued and I began to ask questions about the watch, pondering whether or not I should get one too. Luckily, I caught myself before heading to the mall or ordering online, but these experiences did make me realize that marketing, advertisements, and pressure to be a consumer are everywhere.

Even though I was able to resist the temptation to purchase the FitBit I found it particularly interesting how invasive the advertising has become. It wasn’t a commercial or a billboard that caught my attention, but rather word of mouth.

Today my partner came to me with a great opportunity! A friend of hers get great deals on active-wear winter coats. The coats in question are typically around the $450 dollar range and we can get them for half price due to a connection. At first, I automatically responded “Great! Let’s get one each!”, but after some thought, I have decided that this was a ‘want’ as opposed to a ‘need’. I have had my current winter coat for about 8 or 9 years now. It is of good quality and still does what it is supposed to do, keep me warm in the winter. Once I came to the realization that I was buying into consumerism, I declined the offer. I am just fine with the coat I have.

The interesting part however, is how quickly I said ‘YES’ when I saw the quality of coat I could get and the deal presented. It is almost as though I am hardwired to catch a good ‘deal’ regardless of the need for the item. I feel as though the bargain outweighed whether or not this is a necessity and I realize that I have made many purchases based on the same premise. I don’t buy things too often, but when I do it is typically because I am enticed by some type of good deal or bargain on something that I moderately desire. I am glad I caught myself this time before making the purchase, but this incident definitely made me reflect on how many times this has happened in the past. This is something that I definitely need to and will continue to watch moving forward.

There is one aspect of consumerism that I have neglected to notice over the first week that has been staring me in the face this entire time. EMAILS! I failed to even notice this happening, basically due to the fact that it happens dozens of a times a day…emails that are all advertisements. It has become such a second nature to me to just delete or sometimes scroll through the multiple emails that I receive from various organizations and companies. Costco, MEC, SportChek, Dufresne, Faded Days, Amazon, Ebay, Groupon, Under Armour, Winnipeg Jets, Pony Corral, Sunwing Vacations, Expedia, Golf Town, Peloton Boutique, Aldo, and Sunwing Vacations are all names of companies that have sent me emails over the last week asking me to buy something or to promote some type of product. I was shocked at how many emails I was getting, but what I found even more surprising was that I am now at the point that I don’t even notice them. I think it is time to go through my emails and unsubscribe to these…

“People are working in order to consume.” Mulligan, p 30

“Lipovetsky also contends that more and more people believe they can consume their way to a better life by using products that claim to improve personal health and emotional well-being.” Mulligan, pp. 30

It was not until I began this journal did I start to reflect on what that pay increase would mean to me. When thinking of the pay increase I had previously thought about having more ‘stuff’….or least ‘stuff’ that is of a higher quality. In the past I found myself contemplating being an administrator and ideas would flow through my mind such as buying a new truck, purchasing a quad for the cabin, going on trips more frequently, purchasing higher end clothing, etc… Obviously being an administrator would not make me an extremely wealthy individual, but it does have the potential to create a higher standard of living for myself and my partner, at least in the sense that I can have nicer ‘stuff’. Not much else would change. Life may get more stressful, hours may get longer, I may have more responsibility, but hey….. I’ll be making more money.

Before writing this journal and truly reflecting on my daily habits being an administrator seemed like the obvious route to take due to the increase in pay, which assumed would relate to a happier life. Now that I have had a chance to reflect I now realize happiness and self-accomplishment had nothing to do with it but rather having newer, nicer stuff was one of the main driving factors. If I do decide to pursue this path it should strictly be because it is a position that I value, am passionate about, and a vantage point that I feel that I can make a difference at, not for the money and opportunity to have more ‘stuff’.

“Next time you think about buying something, ask yourself, ‘do you really need this” Etzioni, Amitai (2012). You Don’t need to Buy This 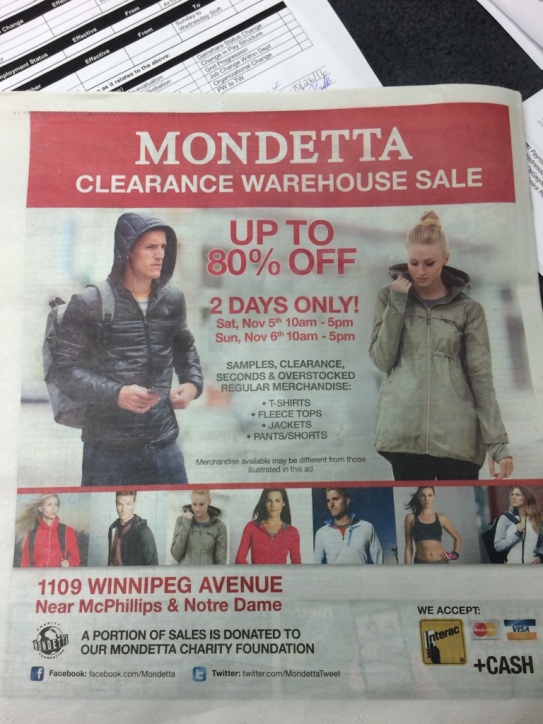 I was sitting at work on a prep when out of nowhere I received a text from my partners’ mother. The text was an image of a clearance warehouse sale at Mondetta sale for up to 80% off merchandise. This image, at first was tantalizing. My first instinct was to peruse through the ad and see what I ‘needed’. This time however, I quickly caught myself looking for things I absolutely do not need and stopped looking. Before knowing about this add, there was no need for any clothing items that I was aware of, no need to update or make any purchases, but once the opportunity arose to purchase something at a bargain, my interests were piqued. It is so interesting to see how marketing and advertising can make us feel as though we ‘need’ to buy something. By exclaiming that there is a ‘sale’ automatically this sense of urgency came over me and I felt that I would be lucky to buy one of these items at such a good price whether or not I actually need it or not. Thankfully, I made the right decision, didn’t let marketing and my ‘consumeristic’ mentality get the best of me, and deleted the message along with a ‘thanks, but not looking for any clothes right now’ message.

View all posts by smithsonjournal

I'm Ryan Smithson and I am currently an M.Ed. candidate from Winnipeg, Manitoba, Canada.